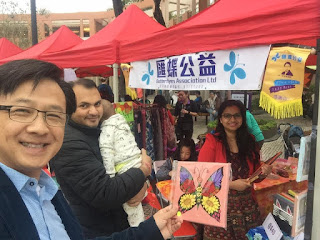 I hope you are doing well in Toronto. Before bidding the farewell last year, you said you were not too sure about the future of Hong Kong.

Well, I guess I understand what you mean. The world seems to be a bit weird and chaotic lately. I hope the dust will settle sooner or later.

The world was still learning to accept the fact that Donald J. Trump took up his presidential office on 20th of January 2017. And on top of that, seven days after his inauguration, he signed an executive order to restrict new emigrants from certain Islamic countries to enter into the United States.

Many may regard Donald Trump’s actions to be immoral and unjust. In fact, this was demonstratively true when his orders were challenged in court for being unconstitutional, and unamerican – I find this ironic, especially when Trump is the President of the United States. It is seldom the case that the court will attempt to interfere with the presidential orders and its success, to a certain extent, shimmers some hope for the United States.

The world which we used to know is somewhat different now. Old virtues are readily forgotten and cast aside by naive idealists. It has come to a point where the minds of younger generations are rendered obscured by their own naivety.

Anyhow, as far as the law enforcement and the judiciary in HK are concerned, I do not think they are entirely satisfactory either.

The dilemma between upholding the Rule of Law and Civil Disobedience; the sharp contrast of the consequences between the conviction of the seven policemen for taking justice in their own hands and that of the victim who actually assaulted the police in the first place, for which, the former were jailed for two years whereas the latter was sentenced to five weeks only. It triggered a public outcry for justice and fairness.

It has always been a difficult task to attain a just and fair decision for the parties of a dispute.

It reminds me of a famous saying of “not only to do justice, justice must be seen to be done" in re ex parte McCarthy; also as per the late Lord Denning in his book, the importance of “The Due Process of Law".

Despite having 1,003 arrests made during and after the Occupy Central event, a number of “Gulf Woo" arrests made in 2015, and even the riot happened in February, 2016, so far there was only a limited number of prosecution preferred and processed. The progress of prosecution was basically slow and the conviction rate was just too low.

Some say it is fair but some other disagree. While some people doubt about the disparity in sentencing, some other even doubt about the reason why only a few was selectively prosecuted. This is exactly the complaint that the Department of Justice face with when they seek to disqualify the four delinquent lawmakers from their Legco seats, those respondents protested that they were unfairly prosecuted.

Despite the fact that the aftermath of the Occupy Central event has rendered both the Department of Justice and the Judiciary to face with tremendous pressure in handling all those politically sensitive cases, all those cases need to be dealt with and disposed of effectively and efficiently!

During a plenary discussion of the National Deputies held in Beijing early this week, Mr Zhang Dejiang, chairman of the 12th National People’s Congress Standing Committee warned that the overall economy and GDP of Shenzhen will surpass Hong Kong in two years. I have mixed feelings about this. On one hand, we should celebrate the prominent success of our counterpart at the other side of the border. But on the other hand, will this put Hong Kong at risk economically or otherwise?

I mean, it is no surprise that Hong Kong is being tailed off by Singapore, that is inevitable. But to say that we should accept that our economy will also be taken over by Shenzhen, that certainly is of no pleasure to anyone in Hong Kong at all.

Perhaps it is time for us to put all the political arguments behind and just move on. We have been indulging too much of our time and opportunities on harum-scarum politics. We will never reach a satisfactory conclusion with both camps, the pan-dam and the pro establishment. As it is only a matter of preference, perspective. What we need to do, I believe, is to focus on the real issues. Issues that are pertinent to our economic development. To ride on the economic trend of the mainland is no doubt a sensible way out. At least, it is true for us to benefit from the economic success of the mainland in the foreseeable future.

In order to do that, I believe all quarters of the society need to work towards a common goal and to forgo the differences we have for the sake of Hong Kong. So long as the people of Hong Kong can function as one, a unity, anything is achievable. But if we were to keep things as it is, I’m afraid that the damage done to our rule of law and the economic growth of Hong Kong may one day be irreversible.

Now, Robert, I will speak and work from my position as a lawmaker. My job is, inter alia, to supervise the work of the SAR government. I will urge the Secretary for Justice to combat against all those obstacles and aftermath of the Occupy Central event determinably.

Justice delayed is justice denied. Hong Kong can’t afford it as it will hurt us all deeply.