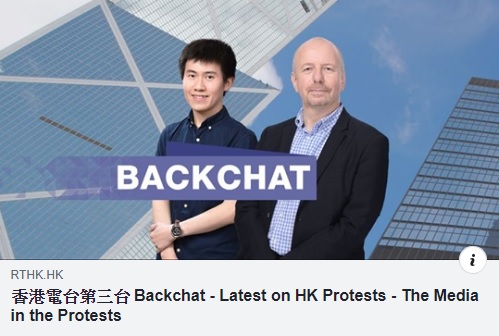 Having listened to the interview again, in one of my rarer moments of respite, I felt that it is necessary to clarify certain things pertaining to the content of the RTHK Back Chat interview done in the morning of 6 Sept 2019 (Fri).

Whilst I was happy and grateful for the opportunity to take part in the discussion in which I tried my best to answer some of the questions en route to work, I feel that some of the remarks made against me were questionable, to say the least; in particular, the accusations made against me for inciting the public to violence and unwarranted demands for my arrest ‘for doing so’. Besides, I must state it clearly that the topical discussion for me to comment about in that morning was supposed to be about journalism but then it turned out half of its length to be accusing me for a crime that I didn’t commit regarding the big brawl took place at Yuen Long on 21st July! So it was virtually an ambush on me by RTHK by allowing the discussion to be hijacked.

Against these allegations, I want to maintain that I only want to promote law and order. Chaos, violence, and so forth are contrary to my goals and beliefs, especially in these trialing times. There is not a slither of ill will in me to incite the public to resort to violence, case in point in the previous peaceful gathering I had organised on 30 June 2019 to support of our Police Officers. This is in stark contrast with yellow-black movements that continued to destabilize Hong Kong, most notably the attack on LegCo on 1 July 2019. If peace is my goal, then the antithesis of that would be the political stance adopted by some of my colleagues in LegCo, e.g, Lam Cheuk Ting, Eddie Chu who continued to support an estimation of 50 serious violent incidences happened in the last three months of Hong Kong, or District Councillor Roy Tam for inciting his entourage to destroy my Tsuen Wan District Office that provides free legal consultation to the public.

Though as it may that I am a controversial figure, it does not entail that I should be blamed for arousing all the controversy. In fact, historically speaking, controversies are often the product of misinformation and ignorance of the masses. To be precise, those promoting Hong Kong Independence in guise of freedom of expression or academic autonomy should be banned and punished. Those who condone violence and still harbour those violent acts without paying heed to their obvious consequence should come out and foot it the bills for all the damages at least. I spoke for my constituents and the silent majority who support me and I try to combat these controversies by better communicating my thoughts to the public or by reaching out to the community face to face, personal podcasts on social platforms thrice a week and offering pro bono legal services whenever I can. I have always been transparent, fully accountable and true to my goals. There is only so much I can do, but time is not on my side when I have to juggle between my obligations to my work as a legislative council member, district council member, lawyer, a family man and an ordinary resident.

Regarding the allegations of making life-threatening remarks to Eddie Chu, I ask you to read between the lines. Obviously what was said wasn’t to be taken at face value or literally. In fact, should we translate it literally, we’ll get “choose the path of life or non-life”, rather than the ominous word ‘death’ that was readily paraded on the news and widely circulated by those who have an agenda against me. Since I didn’t adopt the literal word ‘死’ (death) in Chinese, common-sense would guide us to suspect that I am referring to a broader category of meaning, such as to live honourably and proud or live as a husk of a person riddled with guilt and disgrace – should Eddie Chu choose not to curtail the violence in Hong Kong or shed light to the incident affecting my parent’s graves.

I hope that what was said here is sufficient to dismiss the unfounded allegations made against me. I could nitpick every instance of spite listed and read aloud in the interview and respond to them individually, but I choose not to for the sake of my supporters – for further explanation will only insult their intelligence.